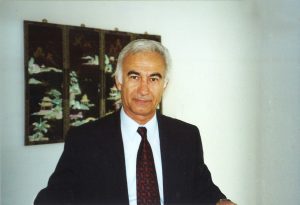 Dr. Ali Al-Taie was born in Bustan, western Ahwaz (1942 – 2018), from a family known for knowledge, literature and poetry. This family’s roots go back to the Al-Tai Tribe.

Dr. Al Taie’s career in seeking knowledge was a long and arduous one that spanned from Bustan where he spent his elementary school years, then to the city of Ahwaz where he joined a teaching Institute and became a teacher in the city of Abadan. Later, he went to Tehran, where he studied and worked as a teacher. He also joined the University of Tehran and lived there for 14 years. During this time, he obtained a bachelor’s degree and then a master’s degree in social sciences. He received the bachelor’s degree for his thesis titled as “Culture and its contemporary meaning”, and his master’s degree for his work “Palestinian Guerrillas”. Both works were written in Persian.

He tried to publish “Palestinian Guerrillas”, but the government during the Shah’s era did not allow this.

During the Shah’s era, Dr. Al Taie worked as a member of the academic department in the Iranian Ministry of Science and Higher Education. In addition, he was the head of the Department of Examination and Selection of University and Institutional Students in Iran (Sazeman Sanjish Amuzesh Kashwar). Dr. Taie’s credentials should have earned him the position as the president of this department. However, due to his Arabic ethnic background, he was not granted the position.

He researched and published several field studies including topics such as “Immigrants from Iraq to Iran” and “How youth spend their free time in Tehran” in Persian from 1964 AD to early 1978 AD. As a man who always sought knowledge, he traveled to the United States where he attended graduate studies in his universities and specialized in Sociology. In 1982, he obtained his doctorate with his thesis; “The Social Revolution Theory in Focusing on the Islamic Revolution in Iran and the Revolution of the Late Leader Jamal Abdel Nasser”.

In the USA, he worked in the media office of the League of Arab States in Dallas, Texas. During this same time, he also started teaching the subject, “Middle East Society”, at the University of Dallas in Texas.

The three books Dr. Taie published in the Persian language in Iran are “Bohran howeit ghomi dar Iran” (The Crisis of National Identity in Iran) and “Arab Khaen nist” (the Arab is not a traitor) and “NaGofteha” (Unspoken).

During his 40 years in the USA, his biggest passion remained on the issue of Ahwaz and defending its rights. He did a lot of research and studies on the matter. The deceased was also a fierce advocate of the Palestinian cause in the USA media. Dr. Taie was not able to go back to his beloved homeland, Ahwaz, as he spent his last 40 years in exile in the United States. He passed away on 25 July 2018.